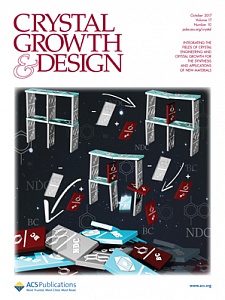 Our research paper "Modulator Effect in UiO-66-NDC (1,4-Naphthalenedicarboxylic Acid) Synthesis and Comparison with UiO-67-NDC Isoreticular Metal–Organic Frameworks" was selected for the cover of Crystal Growth & Design

UiO-66 type metal-organic framework (MOF) with a 1,4-naphthalenedicarboxylic acid  (NDC) linker was synthesized using various amounts of benzoic acid as a modulator. This modulator was shown to lead to defect formation in the MOF structure, such as missing linkers and secondary building units. Moreover, it improves specific surface area and crystal size, while at the same time reducing thermal stability. The fraction of benzene-carboxylic-substituted linkers can be tuned up to 50%.